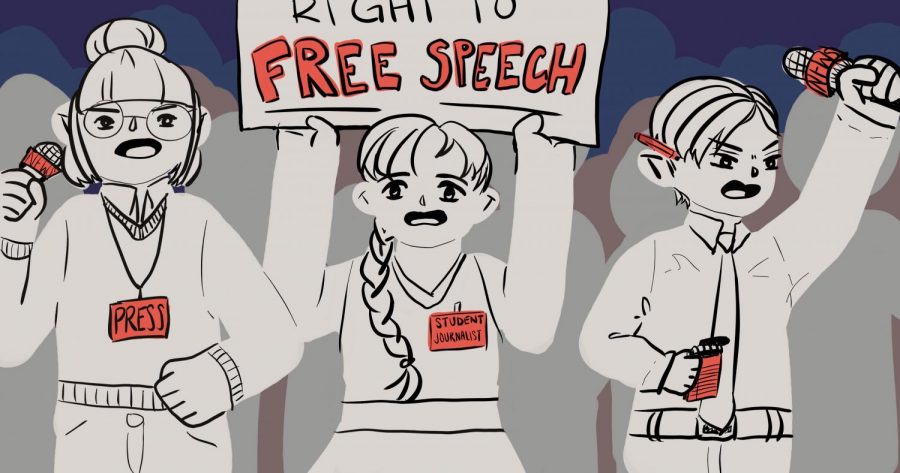 As part of KEMPA’s mission to showcase student publications that are shining a light on today’s world in new and brave ways, we present an article that The Conant Crier published on December 11, 2018: an editorial about free press, Jim Acosta, and the Har-Ber Herald.

The full article text follows, and the link to the original article is also provided to get to The Conant Crier’s webpage.
Whether in high school or the White House, a free press is central to democracy

Social media and news outlets buzzed with reports about the suspension of CNN White House correspondent Jim Acosta’s press pass soon after it happened. The issue sparked controversy over journalistic rights and propriety.

More recently, the school newspaper Har-Ber Herald, of Har-Ber High School in Springdale, Arkansas was suspended and its teacher adviser warned with potential firing for publishing a critical piece on the transfer of five football players to the high school’s rival school.

Although Arkansas has state laws protecting student journalists “right of expression,” and it is one of just 14 states protected by recent New Voices legislation, the school district still decided to suspend the paper. Preventing the Har-Ber Herald from publishing and revoking Acosta’s press pass both violate First Amendment rights and set a dangerous precedent for the removal of free speech rights of journalists at all levels.

Student journalism plays an important part in the school community. Student papers such as the Har-Ber Herald and the Conant Crier are not only a source of information and entertainment, but also a place for students to voice their thoughts and opinions. In this way, student newspapers are tools for change and improvement that student bodies across the country can use to bring issues to their administration’s attention.

A key function of school newspapers would be taken away if administrators were to hinder publication, as in the case of the Har-Ber Herald. The suspension of the entire newspaper also violates the rights to free speech of student journalists by taking away their means of expression. The case of Har-Ber Herald follows in the shadow of Acosta’s press pass suspension and threatens to set a precedent for other school districts to follow.

Acosta’s press pass suspension was the result of him allegedly placing his hands on an intern during a press conference on Nov. 7. However, a video shows that Acosta was simply trying to shield the microphone from an intern trying to take it. CNN sued the administration in order to restore Acosta’s pass, which was temporarily returned following the court case on Nov. 16. This victory was short-lived, however, as the White House established a new code of conduct, allowing a reporter only a single question before they must “yield the floor,” or allow other reporters to ask questions.

These new rules undermine journalism, as many of the White House correspondents see follow-up questions as essential to their jobs. However, if a reporter fails to adhere to the new rules, they run the risk of getting their pass suspended. These new rules are harmful because they allow President Trump to avoid answering questions that he does not like and to target reporters from agencies that are not favorable to his image. True freedom of the press allows for equal opportunity for all correspondents to be able to ask their questions, without the threat of having their pass taken away.

These new rules and Acosta’s pass suspension set a precedent for many institutions around the country. Organizations in positions of power over journalists can now use the actions of the president to justify the silencing of media outlets they disagree with.

Journalism is important to communities everywhere, no matter the level, and community members need to be informed about problems that may be happening in their town, state, or country. Newspapers are a check to the power of institutions that have major influences in our daily lives.

Student journalism needs protection because it is subject to powerful institutions like school administrations, school boards, and even community members. When someone as powerful as the president overreaches and tries to silence the press, smaller organizations believe it is acceptable for them to do the same. This puts student newspapers at risk.

The suspension of the Har-Ber Herald shouldn’t intimidate other student publications into not pursuing investigative reporting. In the unfortunate case that an administration does decide to shut down a student newspaper, there are other ways for students to continue publishing their work. Student journalists can reach out to local news publications to publish their story if they are no longer able to publish it themselves.

Students should also know their state laws regarding prior review and press rights to know when their rights are being violated. Further, The Student Press Law Center is a free resource that guides student journalists through the various and complex legal situations they can find themselves in.

In order to safeguard the rights of the press, students need to band together and make a stand for their right of speech, and likewise, bigger news organizations need to cooperate with each other. For instance, Fox News supported CNN’s lawsuit against the Trump administration despite their partisan differences. Following this example, Crier, as a student publication, lends our support to the Har-Ber Herald in their struggle against their suspension.