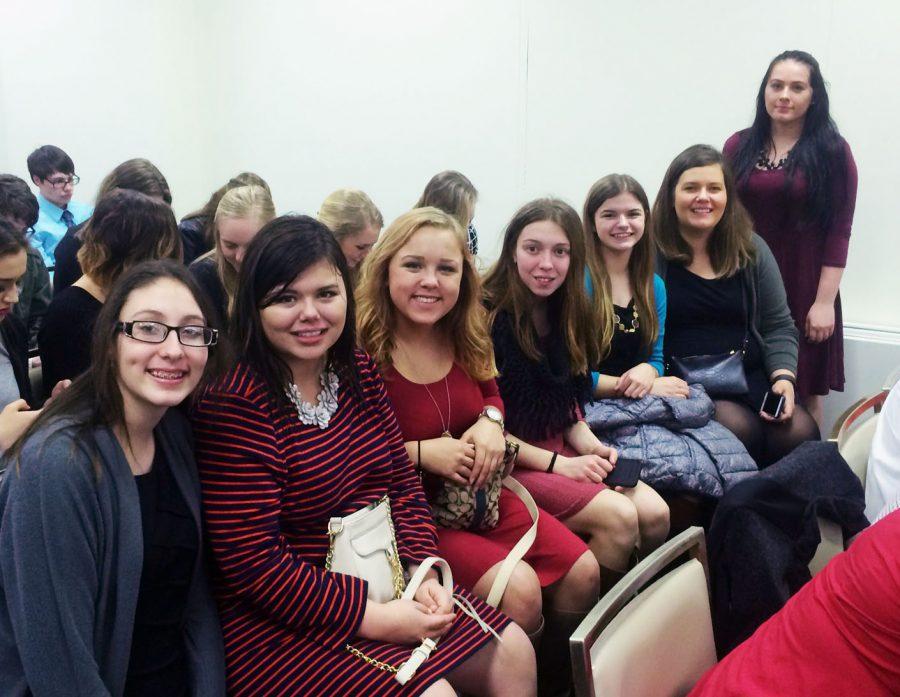 Adviser Kendall Huffman with her journalism students at the State Capitol to testify on behalf of the Speech Rights for Scholastic Journalists Act.

The journey was one filled with surprises, disappointments – and a lot of luck. Surprises included finding out Gov. Rauner signed the bill via a news release that someone posted on my Facebook timeline.

All part of the legislative journey.

It started with a meeting with me, Illinois JEA State Director Brenda Field and Illinois State Rep. Elaine Nekritz (D-57) on Jan. 11, and culminated with the bill officially being sent to Illinois Gov. Bruce Rauner on June 27.

Under Illinois law, once the governor gets a piece of legislation that has passed both the House and Senate, he or she has 60 days to sign, veto or take no action on a bill. If the governor does not take any action, it becomes law.
That means deadline for the fate of HB5902 was Aug. 27.

Getting there, however, was a challenge, albeit an exhilarating one.

The success of any piece of legislation is development of partnerships with key organizations and individual stakeholders. This seems especially important for legislation related to something as specific as scholastic journalism.

Our work with key sponsors Rep. Will Guzzardi (D-39) and state Sen. Daniel Biss (D-9) was anchored by Student Press Law Center Executive Director Frank LoMonte whose trips to the Illinois statehouse and hours and hours of phone conferences provided counsel, insights and ideas that were unsurpassed.

The unpredictable element in pursuing HB5902, or any piece of legislation, is luck. When the Illinois Press Association (IPA) suggested we meet with Rep. Nekritz, how did it know that Nekritz was a representative for part of Buffalo Grove, where both Brenda and I live? And Lady Luck smiled when Nekritz reached out to Guzzardi who is a former journalist. The stars, as it has been said, were aligned.

We were amazed, and still are, at the bipartisan interest and support in the House Judiciary –Civil Committee that not only resulted in what LoMonte called a stronger bill, but in the end, nine sponsors for the bill – six democrats and three republicans.

Biss, who was the lead sponsor on the Senate side, was also recommended by the IPA. Through networking and work by advisers, by the time the bill left the Senate Judiciary Committee we had three more sponsors – all of whom had a background in journalism.

STAN ZOLLER, MJE, is lecturer of journalism at Lake Forest (Illinois) College and Chicago project coordinator for the Center for News Literacy. He is an at-large director of the JEA board. Zoller has been honored by Dow Jones News Fund and is an NSPA Pioneer. He is vice president/membership and president-elect of the Chicago chapter of the Society of Professional Journalists.